Starting on 19 September 2016, the Feldjäger regiment 2 (German military police), led by the 6./Feldjäger regiment 2 (Bonn), demonstrated the skills of the field of activities at the Information and Training Exercise 2016 (ILÜ 2016) in Munster. As in previous years, the Feldjäger were dynamic in the course of the presentation ‘Land forces in action’ and were part of a static display for the capabilities presentation of the ‘Joint Support Service’.
However, the tight order situation domestically and abroad did not permit a single company to face the ILÜ 2016 challenge on their own. Hence, at the conclusion of the preparatory measures, 36 soldiers from all of the regiment’s companies were planned for the ILÜ, which had its last presentation day on 14.10.2016 and subsequently transitioned into its dismantling phase in calendar week 42.

The static display presented a complete overview of the capabilities and equipment of the Feldjäger force in four tents and by means of an expressive fleet of armoured and unarmoured vehicles. There was ample space in the tents for the different specialisations that especially distinguish the field of activity. Numerous exhibits, such as pieces of equipment, information boards and photos additionally illustrated the multi-facetted work of the Feldjäger. As the Bonner Feldjäger company has an additional protocol order, they presented their individual trademark by exhibiting a complete ‘1-7x’ escort. ‘We attract a lot of visitors with our clearly arranged booth, numerous informative boards and escort as a real eye-catcher and have been receiving extremely positive feedback,’ reported First Lieutenant Goldbeck, main contact person of the 6./Feldjäger regiment 2 at the ILÜ 2016. 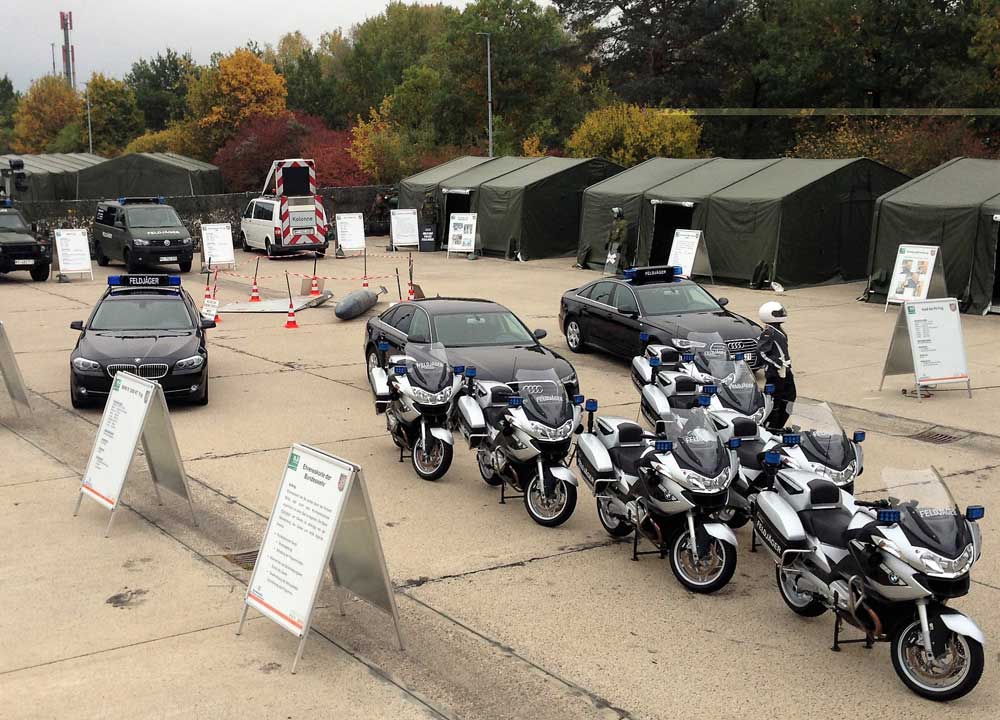 While the main focus was on the static capabilities presentation of the Joint Support Service, Staff Sergeant Mette, also a member of the 6./Feldjäger regiment 2, and his staff presented a selected aspect of the scope of duties in a dynamic way. As part of the demonstration of the land forces in action, they presented the deployment of forces in the course of an action against aggressive or violent demonstrators or agitators. In the so-called ‘image’ that Staff Sergeant Mette presented with his men and women, the guard cordon denied the group and aggressive agitators entry into the area behind with the support of the water cannon Yak and other combat vehicles. Particularly impressive: The ‘live’ use of the water cannon Yak and the actions of the snatch squad to seize the ringleader and turn him over to the local authorities. ‘It is quite challenging to pack all of this content into a four-minute illustration’ stated Staff Sergeant Mette.

Though highly motivated, the diverse group of members from different Feldjäger companies needed intensive practice to act in line with the ‘script’. The result of the live runs at the ILÜ 2016 in front of a selected audience was very presentable, however, and provided a worthy representation of the field of duties of the Feldjäger’s nature at the Bundeswehr.

If you have any questions regarding our dealer licences, contact the IFEX® Sales Team:

Before using IFEX® products, your employees are trained by our specialist staff to be able to react properly and quickly in the event of fire.